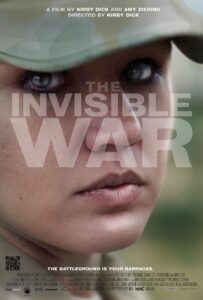 The Invisible War is a groundbreaking investigative documentary about one of America’s most shameful and best kept secrets - the epidemic of rape within the U.S. military. The film, a nominee for the 2013 Academy Awards, paints a startling picture of the extent of the problem. Today, a female soldier in combat zones is more likely to be raped by a fellow soldier than killed by enemy fire.

The Department of Defense estimates there were a staggering 22,800 violent sex crimes in the military in 2011. Among all Active duty females soldiers 20 percent are sexually assaulted. Female soldiers age 18 to 21 accounted for more than half of the victims.

At the core of this film are interviews with the rape survivors themselves. Producer/Director Kirby Dick is known for making highly influential award-winning films. The Invisible War is an Oscar nominee for Best Documentary Feature, and has been the impetus for possible change on a national level.

Theology Uncorked is a free program for theological reflection, good conversation, delicious wines and fresh popcorn! This program is offered usually on the first Monday of each month with presentations, movies, etc., which allow us to further examine our lives as it relates to Christ's teachings. You are welcome to bring snacks or a bottle of wine to share as we delve into our theology! All are welcome to join us!