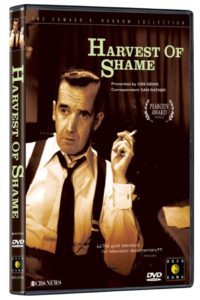 This 1960 television documentary was presented on CBS by broadcast journalist, Edward R. Murrow. It shows the plight of American migrant agricultural workers.

It was Murrow’s final documentary for the network. He left CBS at the end of January 1961 at John F. Kennedy’s request to become the head of the United States Information Agency.

This was an investigative report intended ”to shock Americans into action”. It was the “first time million of Americans were given a close look at what it means to live in poverty” via their televisions.

Theology Uncorked is a free program for theological reflection, good conversation, delicious wines and fresh popcorn! This program is offered usually on the first Monday of each month with presentations, movies, etc., which allow us to further examine our lives as it relates to Christ’s teachings. You are welcome to bring snacks or a bottle of wine to share as we delve into our theology! All are welcome to join us!