My Dear Brothers and Sisters in Christ,

While my legal name is Jens-Peter Jensen, Jr., I’ve been called “Jay” since I was born on April 2, 1951. I was raised in Colorado and have two sisters – I am the “middle child”; both of my parents are deceased. I was not raised in a Catholic home. As a child we attended the Evangelical United Brethren Church which was eventually absorbed into the United Methodist Church. When I was 16, I became a member of a non-denominational, primitive fundamentalist Christian sect and was a member of it until 1987. 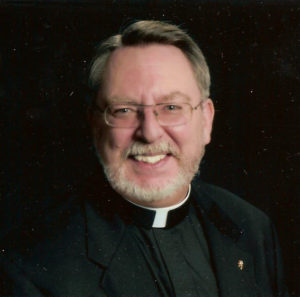 After graduation from high school and St. Anthony Hospital School of Nursing in Denver I entered the ministry and was ordained in August of 1971. I served for 13 years in that ministry in Colorado, New Mexico, Texas, and Utah as well as in Mexico and the Federated States of Micronesia on the islands of Pohnpei, Guam and Palau (Belau). I left that ministry in 1984, and in 1987 I severed fellowship with that group.

In 1992, having gone through the RCIA process, I made my Profession of Faith, received my First Holy Communion and was confirmed at the Easter Vigil at Sacred Heart Catholic Church in Colorado Springs, CO. It was my joy in 1995 to see my younger sister, Jill, also be received into the Church as she too received the Sacraments of Initiation. She is a very active and committed member of our home parish to this day and continues to be my “chief cheerleader”.

I was accepted to study for the priesthood in 1995, and in August of that year I began formation at Sacred Heart Seminary and School of Theology as well as at Cardinal Stritch University in Milwaukee, WI. I received my B.A. in Religious Studies from C.S.U. in 1999 and graduated with an M.Div. from SHSST in 2001. On May 19, 2001, I was ordained a priest at St. Mary Cathedral in Colorado Springs by the Very Rev. Richard C. Hanifen, D.D., Emeritus Bishop and founding Bishop of the Diocese of Colorado Springs. My first assignment was as the associate pastor at St. Mary Cathedral. Less than 2 years later I received my first pastorate. Eleven months after that assignment began I was asked to take the pastorate of another parish in Colorado Springs where I served for four years before coming to the Diocese of Tucson in 2008. Since my arrival in our Diocese in June of that year I have served one year at St. Odilia Parish, two years at St. Augustine Cathedral which was followed by two years at San Martin de Porres Parish in Sahuarita. On April 10 of 2013 Bp. Kicanas appointed me as Associate Pastor to Fr. John Lyons and the community of St. Thomas the Apostle Parish. On April 4 of this year our Bishop, Edward Weisenburger, appointed me to come among you not alone as your pastor, but perhaps more importantly as your servant and your brother in Christ.

It is a profound joy and no small responsibility to be honored to succeed a man who truly is a living legend, Msgr. Robert Fuller, who refuses to let me call him “Msgr. Fuller” or even “Msgr. Bob”. He told me in our first meetings, “Call me Bob,” and that’s the gentle cordiality that has grown between us since. We’re all aware of Fr. Bob’s 31 years of good and faithful service here. I won’t have that many years here I know, but for whatever time God will let me be among you I will give you the very best that God imparts to me. I look forward to our ongoing growth in Christ and to the wonderful relationships that I know await me here at St. Frances Cabrini Parish.

With deepest brotherly love in Christ,

2 thoughts on “A LETTER FROM NEW PASTOR, FATHER JAY JENSEN”